Anyone can become an artist with the “Open Stage” project 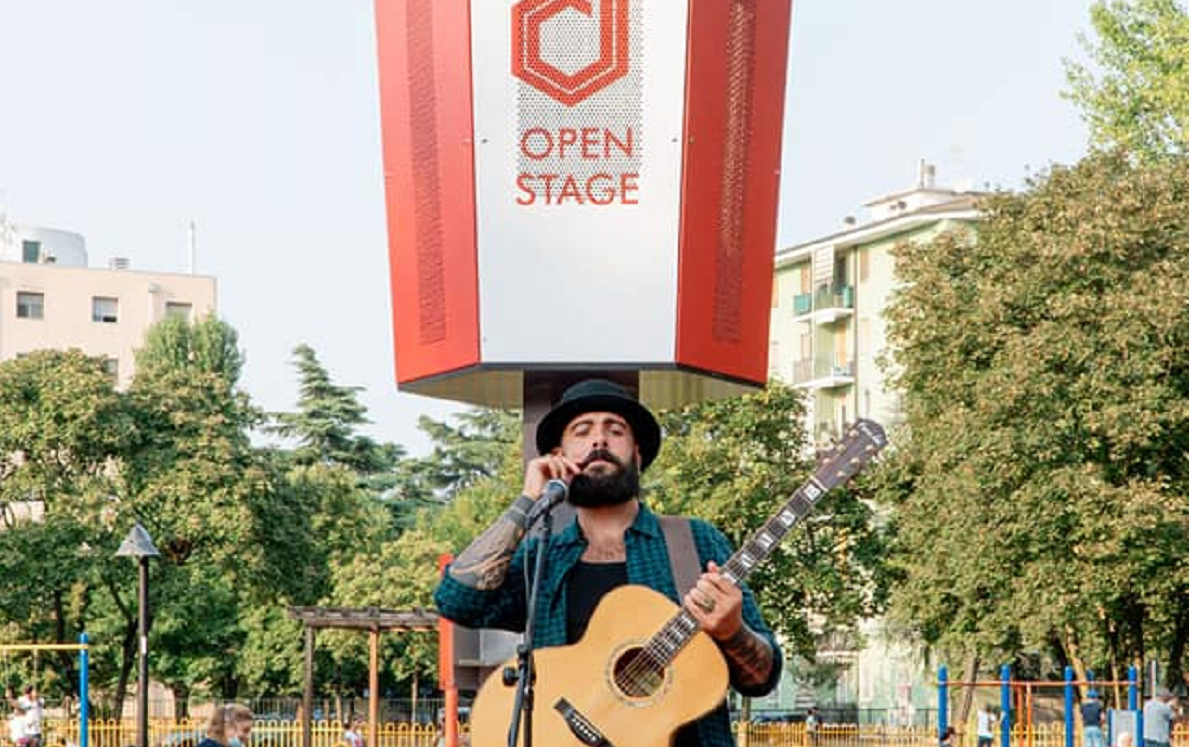 Open Stage, the stage suitable for everyone

On September 26th the brand new “Open Stage” project was inaugurated in Pioltello (Milan), as a world preview: a complete, well-equipped, smart stage for everyone.
What does this jewel that will revolutionize the way of making music look like?
Open Stage looks like a small “mushroom, the size of a lamppost, but with a hyper-technological content.
Open Stage, thanks to its technology, allows you to easily set up a stage ready for anyone who wants to perform, ideal for outdoor events and equipped with anti-crowd sensors, which allow it to be used even in this emergency period.

How Open Stage was born

Open stage is an innovative project, born from the idea of ​​a group of university students and developed within the “57Barre” project by Officine Buone.
For the uninitiated, Officine Buone is a non-profit organization founded by Ugo Vivone, and aims to bring some entertainment and distraction to those in the hospital.
Thanks to the talent of many young people, mini shows are set up inside the hospitals and young people thus learn to experience live performances, together with the value of an experience of helping others.
Within the numerous projects of Officine Buone, Vivone then obtained funding from the municipalities of Pioltello and Milan, thus managing to launch the new Open Stage project.

What is Open Stage

Open Stage promises to revolutionize urban entertainment by providing everyone, with a simple click, a real stage ready to be used to perform safely in a public place.
Open Stage looks like a large street lamp: the audio speakers and a LED lighting system are placed at the top, and their operation can be remotely controlled via a simple app.
From their smartphone, stage users, for example the musicians of an event but also citizens who want to perform during an event, will be able to book their performances (on the days and times established by the municipal administration) or consult the program of events.
Those who want to perform will therefore have to book with the app, and then, at the time of performance, bring their musical instrument or computer with them and connect it to the professional mixer contained in the base of the stage.
Music, entertainment, and above all safety
The operation of Open Stage takes place in complete safety, according to the recent national protocols on street entertainment, and also considering the recent provisions on anticovid measures.
The stage, in fact, will be equipped with anti-crowd sensors, able to suspend the music in case of excessive density of people around the artists.

The inauguration of 26 September

Last Saturday 26 September Open Stage was inaugurated as part of an exceptional event organized by the municipality of Pioltello, in which Vegas Jones, Cesareo (guitarist of Elio and Le Storie Tese), Elianto (finalist of Italia’s Got Talent) and many of the most important artists of the “Special Stage”, the important music festival that takes place in the wards of Italian hospitals.