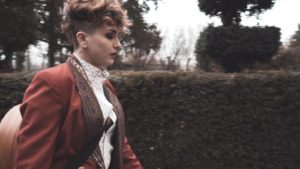 Sabrina Dolci enters the world of music at the age of 15 as a singer and immediately becomes the voice of two bands: the Clan Band proposing a 70’s / 80’s revival, and the Cold Funky.

He participated in the Festival Mare winning first place, and in the Talent Vocal Selection, finishing second.

In 2019 he won the third edition of the Umbria Voice Music Festival, a musical contest dedicated to independent or emerging performers, songwriters and bands.

For some years he has been collaborating with Beppe Carletti (Nomadi) and soon he will release his first cd, produced by Carletti and with the collaboration of famous musicians: artistic producer and executive Giordano Gambogi, Andrea Cusato, Alessandro Lugli (Mario Biondi), Gianluca Tagliavini.

He conducted a music television program for a local TV for a few years.