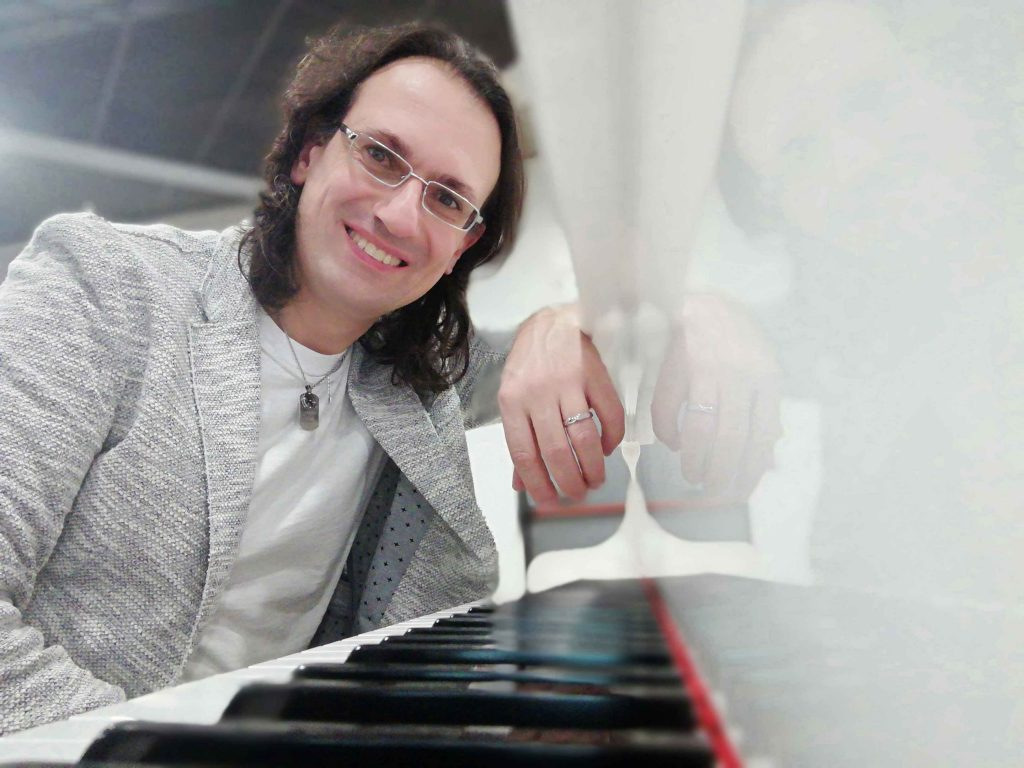 An ever wider and more complete musical offer

Gerli Music management is pleased to welcome the artist Beppe Bornaghi into his team.
Composer, pianist, arranger, with a long history of collaborations behind him, such as Klessidra (cover band of Treviglio in 1995) and as President and director of the Gospel Choir Musical Association The Spirit Inside in 1996.
In 1999 he won the “Pro-Loco D’Adda Manenti” award in the city of Treviglio.
He teaches music technologies at the “G. Donizetti “in Bergamo, at the CPM Music Institute in Milan and at the IITM in Rome. He is also a piano teacher at TPA Music in Bariano.
In the early 2000s he had the opportunity to study at the Hope Music School in Rome together with Gatto Panceri, Fabio Liberatori and Stefano Cenci. Thus he released his first album as a singer-songwriter with the title “Preview”, which earned him the proposal to participate in the selections of “San Remo Giovani”.
National Manager of Midimusic Educational and Finale Italia holds courses and masterclasses of musical technologies for students and teachers in the most important music schools throughout the national territory including SAE (Milan), CTRL Room (Naples), St. Louis Music Academy ( Rome), Faculty of Musicology (Cremona), Conservatory “N. Rota ”of Monopoli, Conservatory“ L. Marenzio ”of Brescia.
Since 2018 he has also been a radio speaker at the T-Radio station, where he conducts the musical transmission Rickshaw together with Alberto Invernizzi.
Since 2018 he is an honorary member of the Dante Alighieri school in Havana (Cuba).
Since 2019 Professor of Music Technology at Musiclab Studio in Turin.

As a composer he sees the recording of 5 instrumental albums, one album as a songwriter and two singles. His music, distributed digitally in all world stores, has enjoyed success in Italy, Belgium, Germany, Cuba, Thailand, Sweden and Switzerland (where it enters the top places among the most listened classical music albums). The scores of his songs are published by Setticlavio Edizioni. Distribution takes place thanks to the agreements with Bravo Maestro Classic Radio and Magadis International first and Pirames International then.
In addition to the aforementioned Preview, mention should be made of Panta Rei (instrumental concept album of duets with the real protagonist piano), Blue Emotions (12 pieces of solo piano) and Esencia.

Beppe Bornaghi’s latest production, Esencia, has very particular characteristics.
Esencia is divided into three volumes and includes 50 tracks. It came out in 2019 and has enjoyed considerable success and is still one of the most listened to classical music CDs in Italy. Esencia represents the artist’s ambitious project to express the essence of music and to accompany the listener, with the help of the piano alone, in an intimate and personal reflection. Even the titles of the pieces confirm Bornaghi’s will: to stimulate, recall meditative, reflective and natural situations. For example, Namaha (from Sanskrit = we do not control what happens), haere noa (in Maori = freedom), Alaya (in Arabic = universal soul), Mhara (in Irish = sea), Heiwa (peace, in Japanese ), etc.
The album is also available on Spotify, where it is heard in 32 different countries (a 400% increase in fans has been recorded in Australia).